CNN: Kuwaiti Guantanamo inmates tell of confessions under to

Nearly 10 years after its establishment, the truth about Guantanamo is emerging rapidly. In addition to all the efforts paid by the defence team of Fayiz Al- Kandari including lawyer Adel AbdulHadi to secure Al Kandari’s release along with all the reports issued by the Human Rights organizations denouncing the practices applied in Guantanamo, the CNN recently published 2 articles entitled « Former Guantanamo inmates tell of confessions under ‘torture” and ” Ex-Guantanamo guard tells of violence against detainees”. Both articles focuses on the huge amount of violence against Guantanamo detainees in several ways and forms. The first report contains cases confirming the absence of proofs for detention or the lack of their credibility if any is provided. The report also covers interviews held in Kuwait with Fouad Al Rabiah and Abdulaziz Al-Shummari two former Kuwaiti detainees at Guantanamo explaining the detailed circumstances of their detention and their fear for the destiny of the 2 remaining Kuwaiti inmates. Furthermore, it seems that the truth about Guantanamo urged a former guard to break his silence and tell about what he witnessed and experienced during his duty in Guantanamo. What did he really see and what did Al Rabiah and Al shammari say after 10 years of the establishment of Guantanamo?

To get a pdf copy of the articles, kindly click below: 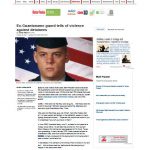