Kuwait’s court of appeal upholds the acquittal of Arif

Kuwait’s court of appeal upheld on Thursday the acquittal of eight nationals, arrested in August 2009 and charged with plotting to attack the US military base at Arifjan, Kuwait and declared them not guilty again.
Al Oula Law’s Founder and Principal Partner Mr. Adel Abdul Hadi told AFP as one of the defence attorneys in this case that the appeals court confirmed today the acquittal issued by the criminal court in May against all the defendants affirming the fact that the suspects had been tortured in order to obtain confessions. 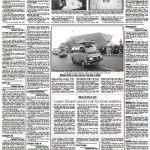