Lawyer Adel AbdulHadi: The United States’ unwillingness to return Kuwait’s citizens stems from a lack of respect for Kuwait’s interests.

In his latest statement, Lawyer Adel AbdulHadi revealed there can only be one out of three possible reasons the United States has ignored Kuwait’s pleas for the return of its citizens and proved it with facts and historical events. As his client Fayiz al-Kandari is a man held in a cage and brutally tortured for more than ten years by one of Kuwait’s closest allies, he stated that now is the time for the Kuwaiti government and the Kuwaiti people to take a more forceful stance. He also mentioned that it is important to provide the Kuwaiti people with the Guantanamo plan and that Lt Col Wingard and himself are more than willing to assist the Prime Minister in taking meaningful steps to secure the return of Kuwait’s sons once consulted in this matter. 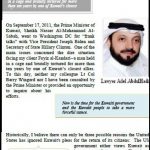 The original version of the op-ed is published in Al Watan newspaper in Arabic, to check it kindly click below:
http://alwatan.kuwait.tt/articledetails.aspx?Id=144187&YearQuarter=20114